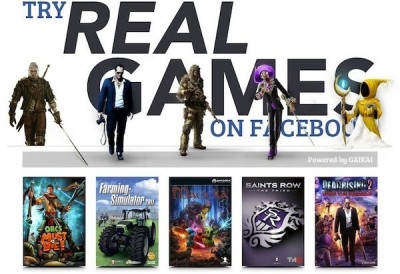 The social media version of Gaikai’s cloud streaming application is now available on Facebook in the US and Europe. Currently, only demonstration builds of Farming Simulator 2011, Magicka, Sniper – Ghost Warrior, Orcs Must Die! and The Witcher 2: Assassins of Kings are available in both territories, with Saints Row: The Third and Dead Rising 2: Off the Record for play exclusively in the United States. Streaming of the full versions of the aforementioned games – among others – is planned for the near future, with MMO streaming also promised.

“People don’t want to leave Facebook to play games – Zynga’s phenomenal success is proof of that,” wrote Gaikai CEO David Perry in a statement, “Cloud Gaming means that the game doesn’t need to be downloaded and run on your computer, it literally means the game runs out on the internet, in the cloud, with the experience being streamed to the players…Most video game publishers are now seeking to grow their digital customer base and unlike movie and music services like Netflix and Spotify, Gaikai gives the game publishers relationships with the customers.”

Perry concluded, “The power of Facebook is not only in the vast size of the connected audience, but also in the quality of the social ties and interactions that occur within the network. The Facebook social graph fuels our mantra ‘Try it for free’, ‘Share it if you like it’, ‘Buy it if you love it’.”