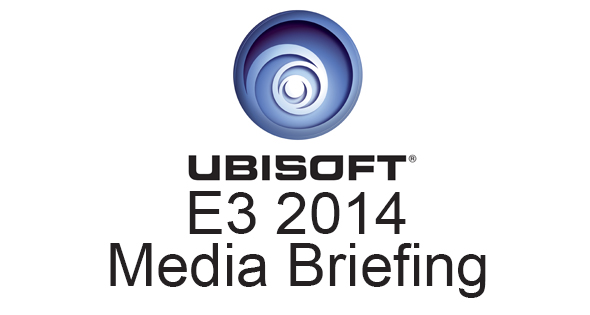 Ubisoft kicked off their press conference with a gameplay trailer for Far Cry 4 showcasing the first five minutes of the title. The trailer features the protagonist on a bus when it is stopped at an armed border, then things start to turn south and the guards begin firing at the bus. The game’s villain then arrives by helicopter and kills the guard leader for opening fire on the bus. The trailer ends after the villain takes a selfie with the protagonist and then has a bag put over his head. Creative director Dan Hay then told us that “every single second” in Far Cry 4 is a story, and players will be able to explore Kyrat for themselves at the show.

Three-time host Aisha Tyler came out next to introduce the show, as well as a new trailer for Just Dance 2015. Executive producer Jason Altman then revealed Just Dance Now, a new way to play Just Dance, with people on different or the same device as you. You can use a smartphone, smart TV, tablet or PC and play “latency free” Just Dance multiplayer.

Ubisoft Massive producer Petter Mannerfelt then introduced Tom Clancy’s The Division. Players take the role of a character who was trained in secret as part of an elite team and embedded into society. Three weeks after terrorists unleash a pandemic, you are activated to investigate the conspiracy and ultimately take back New York. A new trailer was then shown, in which we see a timelapse transformation of New York, from before the pandemic was released to the effects it has on the city.

The Crew was up next, with a trailer showing its “true open-world” with a coast to coast drive from Miami to Los Angeles which it apparently doesn’t even need a loading screen for. Julian Gerighty, creative director then revealed that the coast to coast drive shown was just one of the game’s two hour missions. Gerighty also said that the studio had opened its doors to dedicated members of its community to play the game, and also give feedback on what could be added, and what needs to be changed. Gamers interested in the title can also sign up for a chance to be included in the beta by visiting the game’s website. It will be released for Xbox One, PlayStation 4 and PC on November 11th.

Assassin’s Creed creative director Alex Amancio came out next to introduce Assassin’s Creed Unity with a new trailer set in Paris on July 14th, 1789 where “revolution is in the air.” It featured four Assassin’s working together, revealing the game’s four player co-op experience. It also revealed the game’s release date: October 28th. Players will see the revolution through the eyes of Arno Dorian, the franchise’s “deadliest Assassin yet”. They will be able to build up their own arsenal to fit in to whatever playstyle they choose. Unity‘s goal is to allow players to carve their own path through a huge immersive city. Gameplay was then demoed by Unity‘s level designer showing off Arno’s agility and new free running abilities, starting by rapidly descending down the side of a building. The player walked through the city encountering a side mission, events and showed off some of the combat. The target was upstairs in a building and after killing the guards at the front door, the game’s stealth was shown off as Arno used cover to move quietly upstairs. He questioned his target to reveal the location of Captain Xavier. More free running across rooftops was shown as he made his way to Xavier, until he started moving throughout the crowd. Arno then made his way back up to the rooftops and watched a man executed on Xavier’s orders. He then jumped down and assassinated him which caused the guards to turn around. Arno was then joined by three other assassins.

Ubisoft Montreal creative director Charles Huteau was brought out next to introduce Shape Up, Ubisoft’s next game in the fitness genre for Xbox One. Huteau explained how fitness is boring, and this game aims to make workout routines into a game as they believe people will work harder and push themselves further if they are having fun. The first game shown was called Piano Step, where players step and jump as icon’s scroll up the screen similar to something like Guitar Hero, but you step and jump to the beat of the music. The next game was a versus mode between two Ubisoft developers where they had to do more push ups than the other to win.

Valiant Hearts: The Great War was introduced next. A game built on the UbiArt framework, the engine behind Rayman Legends and Child of Light. It is a “unique puzzle” adventure which focuses on four main characters and their canine companion through the horrors in the trenches across the western front. Ubisoft has also partnered with the documentary Apocalypse: World War 1 coming to the American Heroes channel. Colored pictures and videos from the documentary have been included in the game to provide players with a new way to interact with history. A trailer was shown to set up the stories of the characters featured in the game. It will release on June 25th.

Ubisoft CEO Yves Guillemot came to the stage next to thank all the fans and congratulate all the Ubisoft developers on their games. He introduced the final game for the conference, Rainbow Six: Siege. A multiplayer gameplay trailer showed team Raven vs Team Rogue. Before the match Team Rogue began boarding up doors and windows as Team Raven planned their rescue with a drone inside the house to find out where the hostage was being held. Raven chooses to drop onto the roof and breach all the windows. As they breach and begin moving the hostage, the destruction in the game is shown off with walls being destroyed and later on a player blows up the floor to get the surprise on the other team. The gameplay was captured from a pre-alpha build.