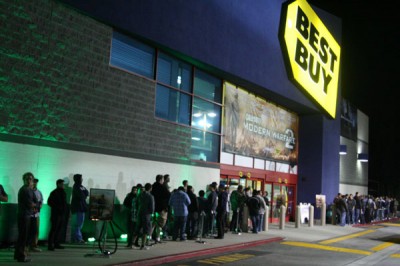 The video game analyst and consumer communities have long assumed that the November launch of Call of Duty: Modern Warfare 2 was the biggest in entertainment history, an assertion backed by its publisher Activision only 24 hours after it became available. Guinness World Records finally recently confirmed this assumption, stating that the $401.6 million grossed by Modern Warfare 2 in its first day on shelves surpasses any comparative launch across media platforms. More interesting, perhaps, was the fact that the launches closest to Call of Duty‘s record came from past video game releases (Grand Theft Auto IV’s $310m in 2008, and Halo 3‘s $170m in 2007.) Both Guinness and Activision have acknowledged the pricing difference between games and other media, but still pertain that the record is “impressive.”

“Video game releases such as the Call of Duty series have outperformed the launches of major Hollywood blockbusters for several years and the day-one sales for Call of Duty: Modern Warfare 2 proved once again that video games have become cultural events in their own right,” said Guinness World Records Gamer’s Edition Editor, Gaz Deaves. “The fan movement and hype surrounding this game in the run-up to launch was almost unprecedented in scale; we acknowledged early on that the big question wasn’t if it would break all-time entertainment records, but rather by how much.”

“This achievement is a reflection of the support from our community of fans around the world,” said Creative Strategist, Robert Bowling from developer Infinity Ward.  “The Call of DutyModern Warfare have been our passion – we’ve dedicated our lives to giving our best, so it’s an honour to be recognized by setting a new standard among all entertainment properties.” series and