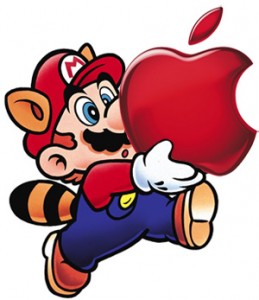 With an iPod in every pocket and (soon) an iPad in every home, Nintendo may be eying up Apple as a potential threat in the handheld market. Having already reported a decline in profits, an offensive against Apple may be just what the Big N needs to continue its industry dominance. Company President Satoru Iwata, in conflict with Nintendo of America President Reggie Fils-Aime’s previous statements, has purportedly spoken to executive staff about “the enemy of the future.”

“Sources close to the Kyoto-based company describe a mood of concern as the hardware and software divisions race to restore the capacity to ‘surprise’ — a traditional feature of Nintendo games that Mr. Iwata holds dear.” A Times Online article reports.

One thought on “Nintendo Sizing up Apple”