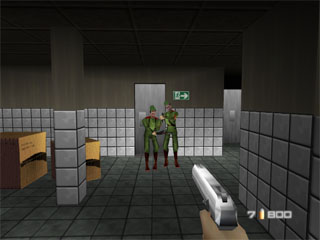 One of the eternally beloved FPS games of any era, Goldeneye 007 was a Nintendo 64 classic that has been remade by fans for generations, but now it could be finally receiving a professional upgrade. Eurogamer is claiming close sources to the matter, and saying that a November-launch of a Wii/DS-exclusive remake of the Goldeneye will be one of E3’s greatest secret surprises. Originally developed by Rare, the remake will supposedly be overseen by Activision, based on some recent domain registrations by the company. The game, if the rumors prove valid, is being co-developed by Eurocom and n-Space.

Happy news, E-Gs? How would you remake Goldeneye, if at all? Let us know below!