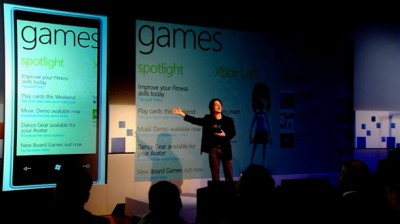 You can already activate and use several Xbox Live Dashboard features on your Windows 7 Phone, full phone-to-console gaming in real time is deep in development. Speaking at the X10 event in Toronto, a representative from Microsoft described the future functionality, including hints at PC-Phone interactions taking place over the Xbox Live infrastructure.

“So initially we’re turn by turn-based,” the Microsoft rep said, referring to the phone-to-phone multiplayer capabilities on day one. “We are working on real-time phone-to-console, likely initially through Wi-Fi — again, operator networks are sensitive to that. That’s not on day one; day one will be turn-by-turn as well as companion-type gaming where you play a level on the phone and it may unlock a level or a weapon or some special achievement on the console game. But, uh yeah — absolutely working on phone-to-console real-time. That is something we’re working on and expect to have in the near future.”