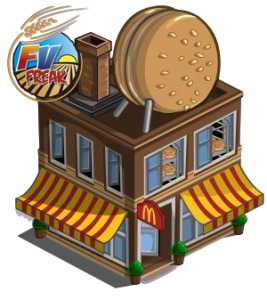 Do you want fries with your field of corn? Fast-food giant McDonald’s has announced a new advertising campaign that will place an entirely new farm in connection with the franchise inside Zynga’s FarmVille. Inspired by the social marketing partnership of appssavvy and OMD Chicago, players can interact in much the same way as other farms within the McDonald’s space, earning digital prizes along the way.

Included in the McDonald’s FarmVille campaign are:

“Joining forces with FarmVille is an incredible opportunity for us to engage with millions of players in the most popular social game,” said Anja Carroll, Director of Media, McDonald’s USA. “What makes our FarmVille effort unique is that it reinforces important features of the McDonald’s brand while enhancing game play for FarmVille players.”

“Our mission is to connect the world through games by offering consumers meaningful experiences that enhance their game play,” said Manny Anekal, Global Director of Brand Advertising at Zynga. “Tens of millions of people play FarmVille daily and this unique campaign with McDonald’s, one of the most recognized brands in the world, further strengthens our commitment to delivering high quality in-game brand experiences.”

“McDonald’s on FarmVille represents the re-thinking of the delivery and reception of advertising,” said Chris Cunningham, co-founder and CEO of appssavvy. “Today it is about understanding the social activity taking place and only then figuring out a way to join relevantly through value-added marketing, which McDonald’s has done to perfection.”