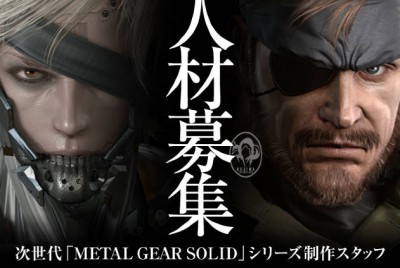 Hideo Kojima just came seem to retire from his Metal Gear franchise, despite dozens of press statements over the years to the contrary. Several job listings for Kojima Productions name-drop a “Next Generation Metal Gear Solid series,” asking for experience on the current generation of consoles. Whether “Next Generation” means a new graphical engine, console generation, or simply a new franchise has not been specified.

With Metal Gear Solid 4: Guns of the Patriots rounding out series’ veteran Solid Snake’s story on console, and Raiden’s tale already in motion with this year’s Metal Gear Solid: Rising, its unclear how far this new series will stray from existing material, if at all. Kojima has already stated that his next game will either be MGS5 or an original game, later posting a twitter message saying, “Had our first meeting for the next ‘A HIDEO KOJIMA GAME’ with the core team members today.”

“Some members are also participating on ‘RISING‘ so 10 people total this time. We will have a meeting every morning to discuss planning, testing, research, and scouting. An open environment to talk about important issues and share our dreams and concept for the project.”