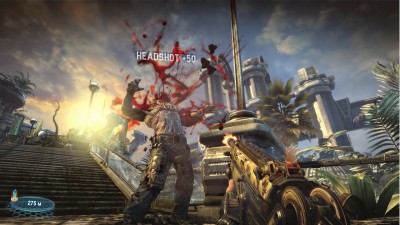 What seemed like a natural addition to a bombastic FPS, but the folks at People Can Fly had to axe a near fully-integrated co-operative campaign for their upcoming alien blast-fest Bulletstorm, as the mode just didn’t seem to gel with the rest of the experience. According to Cliff Bleszinski, the campaign did work within the context of the game, but just got in the way of set-piece moments like a “giant robotic dinosaur”.

“We found that the game shifted from being this kind of puzzle shooter into essentially this downhill skiing simulator, where people were seeing how fast they could get to the bottom of the mountain,” Bleszinski said to the Telegraph. “Really the game just broke down, and it was a situation where people would race through the game, ignoring the vistas and they wouldn’t set up as many skillshots.”

Bleszinski also took time to respond to recent allegations thrown at the game by Dr. Carole Lieberman, as part of a recent Fox News online editorial by John Brandon. “…the violence that this game has is very much a comedic, Looney Tunes, buckets of blood violence. We always relate it to Gallagher the comedian smashing giant water melons in front of his audience, and the majority of your average 18 to 35-year-olds seeing this type of game would see, you know, mutants being sliced in half and be far more inclined to giggle than recoil in horror.”

Bleszkinski continued, “I mean, recently I…was upstairs watching the news and the situation unfolding in Cairo and you see a situation where the people who wanted the dictator out grabbed one of his supporters and just swarmed over him, and I was completely horrified as it was unfolding in real time in front of me, which is an entirely different reaction to when you’re playing a slightly cartoon-y visual look kind of Roadrunner having a boulder land of Wile E. Coyote’s head kind of video game.”

Bleszinski added one final note on the matter, “Language is another issue, by the way. It’s the sort of thing that if you were to actually look at the number of F-bombs in the game, it’s a lot less than you’d find in your average war movie, probably a lot less than in Apocalypse Now or Full Metal Jacket. The thing is that Rick Remender, the writer, he’s like a fusion chef when it comes to combining swear terms in different ways. If you were to look at some of the terms that he uses, such as “ass maggot”, if you were to say ass it would probably fit into a PG-13 movie, and you can say maggot in a PG-13 movie, but when you combine them together, suddenly it starts becoming a very interesting addition to the George Carlin ‘Words You’re Not Supposed To Say On Broadcast” list. Those are things that are very polarising in the world, but at the end of the day, you can turn them all off.”

Already missing the idea of Bulletstorm co-op? Or are you more a “giant robotic dinosaur” type of gamer? Give us your reactions down below!

One thought on “‘Bulletstorm’ Had to Axe Co-Op Campaign”