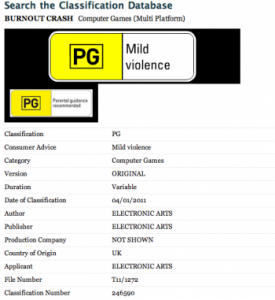 A lot of headlines have revolved around Australia these past few months, but here’s a story that doesn’t involve censorship for once. The Australian Classifications Board has inadvertently revealed a new game in the popular Burnout racing franchise. Burnout Crash will be rated PG in Australia and…that’s pretty much all we know for sure at this point.

Some LinkedIn digging done by Gamerbytes (who originally dropped the story) found that the game is set for Xbox 360 and Playstation, although its currently believed that Crash will be on the digital download platforms respective to those consoles, rather than a full boxed release. Further speculation points to the title meaning the game will revolve around the fan-favorite “Crash” mode present in Burnout 3 and Revenge.

Glad to hear of another Burnout on the way, E-Gs? Tell us below!