LinkedIn has proven itself a woe to yet another game publisher PR team, as the resume of a Blur Studios’ rigging supervisor has ousted the creation of a game cinematic for Dead Rising 3. Jeremie Passerin lists the experience (screencapped below, via All Games Beta) alongside known projects like ‘Dark Souls 2’ and ‘Guardians of Middle Earth’, but offers no specifics beyond the project listing. 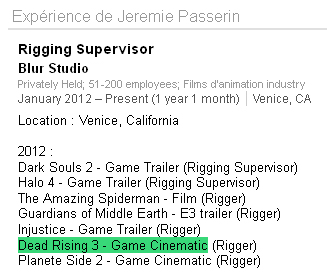 Screenshot courtesy of All Games Beta

The last we heard of a prospective Dead Rising 3 was a reported leak of story details back in December of 2011, which set the game in the fictional Los Perdidos, California and named its protagonist as Rick. Capcom, which hinted at the possibility of a sequel to the franchise the day before the 2011 leak, has yet to comment on the resume and its implications.