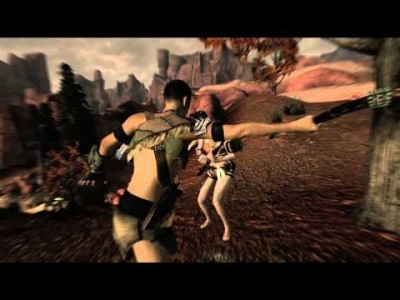 There hasn’t been much talk of DLC in the land of Fallout: New Vegas after “Dead Money”, but a leaked trailer more or less confirms the existence of “Honest Hearts”. According to Fallout forum Duck and Cover, a private Youtube trailer for the content was recently pulled from Bethesda’s account detailing the announcement and first gameplay reveals of the DLC.

According to the scant amount of details available, the game is set to take place in a more tribal locale (with more native enemies to contend with), and revolve around the legend of “The Burned Man”, the one-time legionnaire to Caesar who was burnt for disobedience and has since become a local legend among the troops.

Also uncovered by the forum, a Twitter message from Josh Sawyer may also hint at some “Honest Hearts” details, as it talks about Joshua Graham, a character known as “The Burned Man” and rumored to be in the upcoming DLC. Bethesda will be holding a press event in Utah this week, were most of these details are expected to be either proven or shot down with the expected announcement of the next DLC package.