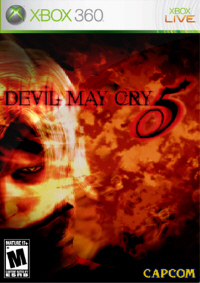 Boxart not indicative of any official product

Developers of the brilliant but short Heavenly Sword and the upcoming Enslaved look to may have been handed the reigns to one of the most innovative franchises in the industry. An unsubstantiated quote has come from the Game Informer camp claiming the studio as the next developers of Dante’s acrobatic demon-hunting adventures, and the move seems to make sense from an analyst standpoint.

“Loose Talk has learned that Enslaved isn’t the only game Ninja Theory is working on-we’ve heard that the Cambridge, England developer is being tapped for the next Devil May Cry,” writes Game Informer. “It is not totally unexpected, however; Capcom has said that although it is shying away from Western developers for new IP, it would continue to utilize them for known franchises, which DMC certainly is.”

Think this the right turn for the DMC franchise? Tell us and Capcom all about it in the comments section below!

One thought on “Rumor: Devil May Cry 5 Coming from Ninja Theory?”