Welcome back to The Gav’s walkthrough of 2009! We’ve already discussed the year in terms of E3 returning, the economy finally catching up to us, and the price cuts that resulted from that. But we have merely scratched the surface of the last twelve months, join me once more as we finish our look back at the Year that gave us all here at Elder-Geek so much to bitch about!

—–Controversy on All Fronts—– 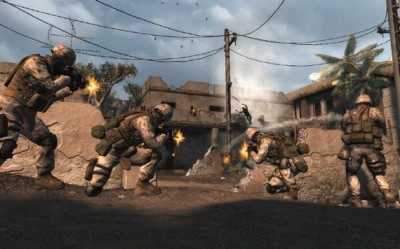 Marines trying to tell the story of Marines through a video game? Won't someone think of the CHILDREN?!

Video Games are still the new kids on the entertainment block, and 2009 was a year that shoved our face hard into this fact. From the smoldering demise of Six Days in Fallujah to the mass media continuing to see our hobby as a threat, there was little time left in the year were we couldn’t be worked up over something.

Let’s take these emotional hassles in order of effectiveness, shall we? First on the chopping block is developers and CEOs finding interviews a place to spout of their personal opinions rather than tell us about their games. The biggest offender this year is Gearbox’s own C.E.O. Randy Pitchford, who pissed off a lot of PC-diehards, including Tripewire Interactive President John Gibson, with his rants on Valve’s digital distribution platform Steam. Not stopping at a single interview tirade, he released a second one shortly after getting wind of his first one’s responses. But beyond simple teeth-gnashing and flame-baiting lies Activision’s Bobby Kotick, who – in between describing how “taking the fun out of games” is better for the industry – threatening to wrench his company’s support of the Playstation 3 for Sony’s audacity to sell their systems poorly, a move which earned him more venom from the gamer community than multiple Uwe Boll movie premieres. Oh, and David Jaffe spoke out about the mass media, but we all kind of expect that by now. 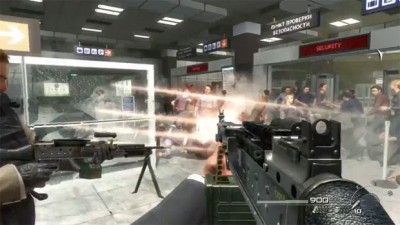 The Russians didn't like this part of the game? Jeez. I can't imagine why.

Second on the crucifix is Australia, or more specifically, it’s ratings board. A wholly-government owned entity, the board rejected two of 2009’s most high-profile releases on the perceived basis of their violence and gore, shutting out millions of possible players for some of the most anticipated games in this generation. Left 4 Dead 2 was first to received the Aussie-Ax, only to have it be lifted after receiving a neutered version which now haunts retail shelves down under (guess they couldn’t resist at least a quasi-release after seeing the game become Valve’s biggest pre-ordered IP ever.) But the lion’s share of the controversial meat went to the ever-eyebrow-raising Call of Duty: Modern Warfare 2, who not only received some heat from Australia, but from Russia as well for its infamous “No Russian” civilian-killing mission. Needless to say making the mission skip-able aided in the eventual dismissal of the controversy. The board is showing signs of competence though, as towards the end of the year they were considering (and asking arguments for) a new M18+ mature rating.

But by far the most irritating controversies on our collected sub-dermal levels were those that the games, and sometimes we ourselves, created. Bethsoft managed to pinch a fringe nerve with their injunction against Fallout originators Interplay – a move which they ultimately lost – but again our main cast features Left 4 Dead 2 and Call of Duty: Modern Warfare 2, the former receiving hate-mail from fan’s unhappy to seeing a full-priced sequel were they expected an expansion pack. But once more Modern Warfare takes the proverbial cake, shooting itself in the foot enough times to earn a Tactical Nuke for their killstreak. First we learn of the game’s lack of a multiplayer beta followed quickly by the absence of a pre-release demo version. But before we can get over this admittedly minor hump, the folks at Infinity Ward and Activision head-shot us by taking away the PC version’s dedicated servers and the Xbox 360 version’s party chat function, all in the name of making each of the game’s multiple versions as identical as possible. Such community rage has rarely been documented, but neither game’s controversy was enough to daunt each title’s bottom line, making the controversy that much sourer at the prospect that these game-makers and publishers will do this to us again.

I’m assuming we’re all on the same page when it comes to this issue, so I’m just going to list of just SOME of the AAA games we could have been playing this year if their creators weren’t afraid of the big bad Modern Warfare wolf.

What was once a supplemental oddity has no become a development necessity. With post-(and day of-) release DLC, companies can extend the shelf life of their games, and gamers can further stretch their cost-sensitive budgets with extra content at a fraction of the cost of a full release.

2009 saw the release of dozens of top-quality additional content that, in other years, would have meant another disc from the developers. Titles like Rock Band and LittleBigPlanet continued literal years of post-release support, while some of the year’s biggest contenders kept their legs with some astonishingly gameplay-strengthening downloads. Both last year’s favorites (Fallout 3’s five downloadable excursions, Grand Theft Auto IV’s Liberty City Episodes) and this year’s biggest releases (Batman: Arkham Asylum’s challenge rooms, Borderlands‘ Zombie Island of Dr. Ned, Dragon Age: Origins’ Day-One adventures, and F.E.A.R. 2: Project Origin/Killzone 2 map packs, among others) came back with some extra goodies for those that kept the disc spinning in their drive. We even got the 20 month-delayed downloadable content for Mass Effect, but the less said about that the better. 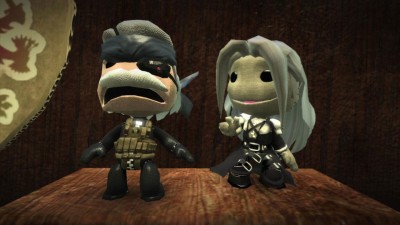 But our hard drives weren’t clogged with expanded missions alone, as 2009 over-stepped all years before it will some spectacular download-only releases, most of which blur the gap between a digital and disc game. The great releases are too many to list, a feat which seems to finally indicate the ever thinning margins between distribution methods and development. The Playstation Network came into its own against the ever-strong Xbox Live Arcade, and even WiiWare had enough variety to keep any gamer occupied in between trips to the game store. And with the digital distribution platform expected to reach $10 billion in cash revenue by 2015, the future has never been brighter for the install bar. The only way it could be even better is if we were confident in the PSPGo’s success. If.

And that’s the past twelve months of gaming in a very condensed nutshell. As alas, I have not yet become master of the multi-verse, my fallibility may have lead me to miss an important event or news items that made your year. To those that find fault with my work here, I offer you the included comments section below to leave your complaints and grievances. I’m the Gav, and on behalf of all the staff at Elder-Geek.com, here’s to an even better 2010!